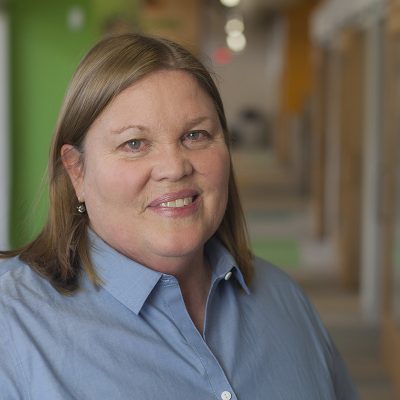 As Legal Counsel, Deborah Walker is responsible for legal matters at Innovation Works.  She manages the contracts and legal due diligence for all investments by IW’s seed fund, TCI program and accelerator programs, in addition to a variety of other contracts related to IW’s programs and business.

Prior to joining Innovation Works in 2006, Deborah was in-house counsel for the software development startup CoManage (acquired by Syndesis, Ltd.) and before that an associate, first in Los Angeles and then in Pittsburgh, with Morgan, Lewis and Bockius.  In those capacities she was involved with forming technology startups, corporate governance, software licensing, mergers and acquisitions, private placements and a variety of commercial transactions.

As I look at the career path that led to my role as Legal Counsel at Innovation Works, a common theme is proximity to the exciting work of scientists and engineers.  In college I was never drawn to the sciences as a calling – my love of books and writing pointed me to literature, journalism and politics – but my favorite newspaper assignments were those that required me to learn about what scientists and engineers were doing, such as driving around campus with the facilities director as he explained the infrastructure for water and steam delivery, or meeting with a professor to learn about the newest developments in sleep research.

As graduation from college neared I had no desire to leave one school to enroll immediately at another.  Though I felt that law school was in my future, I wanted to live in the real world, preferably in a big, exciting city.  And so I took an entry-level job with a science textbook publisher in San Francisco and embarked on a decade of low-paying, interesting work in which I interacted with numerous professors and traveled the U.S. visiting colleges and universities, moving from the west coast to the east and back to the west.

Eventually my interest in law school reasserted itself, and I spent three years in Ann Arbor.  My legal career began with an in-house position at Pacific Gas & Electric, where I worked with other attorneys and engineers.  It was a great job, combining law with learning about the infrastructure of gas pipelines, the electric grid, hydroelectric power plants and nuclear plants, and one I might still be in today but for my husband’s postdoc in Los Angeles.  Not knowing where we might land after the post-doc, I tried to find a position with a large law firm to gain broader experience (broader, that is, than working on commercial natural gas contracts and regulatory matters for a public utility).  Large firms were generally skeptical of my limited in-house experience, but I had the good fortune to meet, via a friend of a friend, a partner at the tiny LA office of a large NY firm who had energy clients that were doing business with the local electric utility, and he asked me to join his small team of associates.  Within a month of hiring me, the law firm decided to close its LA office, and the partner arranged to move the practice group to Morgan, Lewis & Bockius (MLB).

And so began my introduction to mergers and acquisitions, private placements and the associated long hours and routine all-nighters.  When my husband finished his postdoc, I transferred to the much smaller MLB office in Pittsburgh, which was making a name for itself representing local startups with headline-worthy exits.  I worked with clients who were starting new companies, sometimes with the proceeds from an earlier exit, and the M&A and private placement work continued, along with a variety of commercial transactions.  I subsequently went in-house with a firm client, CoManage, and handled software licensing and the company’s day-to-day contracting needs (such as leases, consulting agreements, NDAs, etc.).Shortly after CoManage was acquired, I heard about an opportunity at Innovation Works through a former MLB colleague.  My initial duties at IW were limited to conducting legal due diligence on specific investment opportunities, but over the years the scope of my duties has grown along with the expansion of IW’s programs and funding sources.

Today I’m generally responsible for legal matters at IW.  I manage the contracts and legal due diligence for all investments by our seed fund, the TCI program and the accelerator programs.  As part of this process I am fortunate to meet many of our area’s most promising entrepreneurs and learn about their companies and their technologies.  I also manage a variety of grants and other types of contracts for IW’s programs and business, and I work with our Controller and other members of our team on compliance and policy issues.